Werder Bremen is a German sports club best known for its football playing in Bremen, in the northwest German federal state of the name. The club was founded on 4 February 1899 as Fußballverein Werder by a group of sixteen vocational high school students who had won a prize of sports equipment to set them on their way. They took their name from the seldom used regional German word for “river peninsula”, describing the riverside field they first played football on. 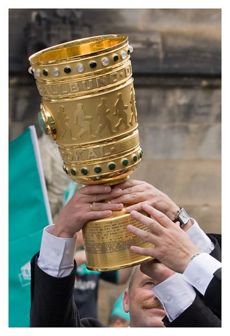 Predecessor side FV Werder played its first ever match on 10 September 1899 against ASC 1898 Bremen coming away with a 1–0 victory. In 1900 FV Bremen was represented at the founding of the German Football Association (DFB) at Leipzig. The club then enjoyed some early success, fielding competitive sides and winning a number of local championships. FV took part in the qualification play for the national championships in playoffs held by the Norddeutscher Fussball Verband (NFV), one of the seven major regional leagues after the turn of the century, but were unable to advance. They became the first club to charge spectators a fee to attend their games and to fence in their playing field.

In April 1914, the club became a department of Allgemeiner Bremer Turnverein 1860 and was briefly known as Sportabteilung Werder des ABTV. However, the relationship was short-lived and the club went its own way again less than two months later.

Steady growth after World War I led the club to adopt other sports and, on 19 January 1920, change their name to the current Sportverein Werder Bremen. Football remained their primary interest, so much so that in 1922 they became the first German club to hire a professional coach. The team made regular appearances in year-end NFV qualification round play through the 20's and on into the early 30's, but did not enjoy any success.

Like other organizations throughout Germany, the club was disbanded on the order of the occupying Allied authorities after the war. They re-constituted themselves 10 November 1945 as Turn- und Sportverein Werder 1945 Bremen, which was changed to Sport-Club Grün-Weiß 99 Bremen on 4 February 1946. The team took up play in the Stadtliga Bremen, and after capturing a title there, participated in the northern German championship round, advancing to the quarterfinals. They were able to reclaim the name SV Werder on 25 March 1946 before taking part in the playoffs.

At the time, professionals were not permitted to play in the German game, so it was normal for football players to take on other jobs, often with the club's local patron. In the case of Werder, a number of the players worked at the nearby Brinkmann tobacco factory, and so the side took on the nickname Texas 11 after one of the company's popular cigarette brands.

Between the end of the war and the formation of the Bundesliga in 1963 the club continued to do well, being recognized as one of the top two teams in northern Germany along with the Hamburger SV. In 1961 they managed their first German Cup win. Their performance was good enough to earn them a place as a charter member of the Bundesliga, and in the league's second season Werder took the championship. They earned a second-place finish in the 1967–68, but then languished in the bottom half of the table for a dozen years. An attempt to improve their lot by signing high-priced talent earned the side the new, derisive nickname of the Millionaires and turned out to be an expensive failure. The club dropped out of the Bundesliga for the first and only time, being relegated to the 2nd Bundesliga-Nord for the 1980–81 season after a 17th place finish.

Werder Bremen recovered themselves under the direction of newly hired coach Otto Rehhagel, who led the side to a string of successes: Bundesliga runners-up in 1983, 1985 and 1986, champions in 1988; appearances in the final of the DFB-Pokal in 1989 and 1990 with a win there in 1991; followed by victory in the European Cup Winners' in 1992. In 1993, the club earned its third Bundesliga title and, in the following year, its third German Cup. Rehhagel left the club in June 1995 after this impressive run for a short-lived turn as coach of Bayern Munich. The impact of Rehhagel's departure was felt immediately, and a succession of coaches (Aad de Mos, Dixie Dörner, Wolfgang Sidka and Felix Magath) led the club into a critical position. In May 1999 former defender and amateur coach Thomas Schaaf took over the team and stopping a slide toward relegation and leading the team to a cup victory only weeks later.

The team's performance stabilized in the following seasons as they regularly finished in the upper half of the table. In 2004, they managed to take both the Bundesliga championship and the DFB-Pokal – one of only four German sides to make the Double. Their performance qualified them for the Champions League play and they advanced to the Round of 16 before a dismal exit on a 10–2 aggregate to French side Olympique Lyonnais. Werder again qualified for the Champions League in 2005, this time through a third place Bundesliga result following a difficult injury-prone season. They once more advanced to the Round of 16, this time being put out by Italian club Juventus F.C. on away goals after a 4–4 aggregate score. A second place in the league ensured the third consecutive Champions League qualification.

In the 2006–07 season, Werder Bremen claimed the "winter champions" title, being the first place team in the Bundesliga before the winter break period, but eventually came in third beind rivals Bayern Munich and Schalke 04. A third place in the Champions League group stage sent Bremen to the UEFA-Cup where they lost in the semi-finals to Espanyol. After the season Werder lost their famous Striker to Bayern. As in the previous season Bremen finished third in the Champions League, but this time lost in the Round of 16 to the Rangers. A vice-championship in the Bundesiga qualified Werder for their fifth consecutive Champions League attendance.

Bremen struggled in their Bundesliga campaign of 2008–09, eventually finishing tenth thus completing their worst performance in more than a decade. Nevertheless Bremen made it to the UEFA-Cup final after yet another third place in the Group stage of the Champions League as well as to the national cup final. After Naldo equalized an early goal by FC Shakhtar Donetsk Bremen lost the UEFA-Cup final 1–2 after extra time. In the final match of the 2008–09 season Bremen defeated Bayer Leverkusen 1–0 to win the DFB-Pokal.

Werder Bremen supporters have a long-running friendship with Rot-Weiss Essen, who currently play in the Regionalliga West (4th tier). They hold a long-term enmity with the supporters of local rival Hamburger SV as well as with those of Bayern Munich, and have developed a recent, but intense, feud with FC Schalke 04, who convinced several of Werder's top players (including Ailton, Mladen Krstajic, Frank Rost, Oliver Reck (goalkeeping coach), and Fabian Ernst) with lucrative contracts to join them.

There are a few Ultra-Groups in Bremen: "Racaille Verte", "Wanderers-Bremen", "Infamous Youth", "Relic Upstarts" and "Ultra-Team Bremen", they support the team in each match. The Ultras of Werder Bremen have a friendship with the Ultras of Udinese Calcio.

The side prides itself on being one of the few port cities in the Bundesliga – currently the only others are Hamburger SV: the toot of a ship's whistle celebrates every Werder goal. This regional pride has its drawbacks, though, as opposing fans regularly taunt Werder Bremen fans as Fischköppe (fishheads), alluding to offensive smell and limited intelligence.

Werder-Fans from outside are ALWAYS welcome in Bremen. The area of the stadium ist simply the most romantic one in Germany, almost always crowded, and one of our credos is: "We are the good ones".

Finally, Werder Bremen is also known for its level-headed environment. In contrast to many other cities, where the local sides are often subject to intense media attention, players and trainers here are usually left in relative peace. Bremen's reputation is that of a sensible, respected and financially healthy club.

Werder Bremen's reserve team currently plays in the 3. Liga and has been a regular fixture at 3rd level football in Germany. It plays its home matches at Weserstadion, adjacent to the first team's ground, and it is coached by Thomas Wolter, a former Werder player.

Weserstadion is a multi-purpose stadium in Bremen, Germany. It is currently used mostly for football matches. It is the home stadium of local football team Werder Bremen

The stadium is scenically situated on the north bank of the Weser River and is surrounded by lush green parks (the name 'Werder' is a regional German word for “river peninsula”). The city center is only about a kilometer away.

It presented a bid to be a host city in the 2006 FIFA World Cup which was ultimately turned down.